Here we go again – yet another article about how parents are doing things wrong!  Everywhere a parent chooses to look, someone is telling them that they are doing things wrong – too much gluten, screen time, sugar, sun, not enough sun, outdoor play,…..  Mention breastfeeding, co-sleeping or sleep training and social media has a meltdown!  So, in an effort to stay away from parent bashing, I am going to stick fairly close to the science and have a look at the literature around pain in kids, and how their parents play a role in reducing or enhancing that pain experience for their offspring.

It is fairly well understood in the pain community that there is an association between catastrophising (essentially, dwelling on the worst case scenario) and pain related disability (Linton & Vlaeyen, 2012).   The theory goes that worrying excessively about our pain or condition makes us less likely to attempt to do things that might make that pain any worse, and subsequently we avoid things.  These means that over time we lose function and become less able to do the things that are important to us.  The literature also paints us a fairly clear picture about the idea that this tendency to dwell on the worst possible outcomes is a trait that can be passed down to our children.  Families can tend to adopt specific ways of thinking about pain, which can ultimately be very unhelpful (Kralkevic, Banozic, Maric, Cosic, Sapunar et al, 2012; Wilson, Moss, Palermo, 2014).  Following on from this, it can also be shown that children who have a parent with chronic pain, are far more likely to develop chronic pain themselves, sometimes even pain that is similar to their parent (Umberger, 2013).

These are pretty important findings and ones that we should be paying attention to as a society.  Chronic pain is costly, and prevention is always going to be the best way to go.  Government bodies are starting to pay attention to this interaction between parents, children and pain and are taking action.  Knowing that early exposure to painful procedures and the subsequent distress, tends to “prime” a child’s nervous system and make them more sensitive to painful procedures in the future, (Taddio, Katz, Ilersich, & Koren, 1997), and also armed with a growing body of research to suggest that distraction during procedures such as vaccination and venipuncture are effective measures to reduce pain and distress in the infant (Chambers, Taddio, Uman, McMurtry, HELPinKIDS Team, 2009), initiatives such as the “It Doesn’t Have to Hurt”  campaign https://www.painbc.ca/news/it-doesnt-have-hurt-campaign are popping up, and will hopefully draw increasing public attention.

So how does the research help us when dealing with pain in our kids?  Firstly, modelling is incredibly important.  A study done by Goodman and McGrath in 2002 showed that kids exposed to their mum undergoing a painful experience (cold pressor task), where the mums were asked to either maximize or minimise their pain response, were compared to a control group given no instructions.  They found that kids who had seen their mum “carrying on” about the experience tended to demonstrate  a significantly lower pain threshold, when they were subsequently given the cold pressor test.  Conversely, kids who had watched their mum minimise her pain, were found to display much lower expressions of pain during their testing.  Kids are like sponges and the things that we do and say about pain experiences directly shape their own understanding about pain.

Parental protectiveness and parental pain catastrophising also can have a big impact on how children function.  For kids, one of the best ways to measure function is school attendance.  A study by Logan et al in 2012 showed that parental pain catastrophising and parental protective responses to child pain,  both independently predicted child school absences.  This tells us again, that kids take their cues from parents, and that in making the decision to take the day off school, parental anxiety plays a big role. 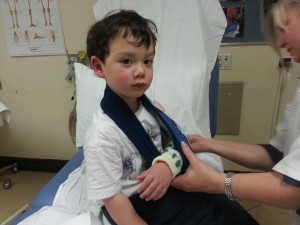 So can we put it all together to provide some evidence based guidance about dealing with pain in kids?  Hell no!  I wouldn’t dare start telling you how to parent  your kids!  However, I can tell you how I try to use these ideas in dealing with my own kid’s ouchies.

As clinicians we need to be aware when assessing children in pain, that parental anxiety and family traits will play heavily into the situation.  As in any pain situation, reassurance is extremely important and in some instances, your time and attention may need to be more on the parent,  than the child in pain.  Equally, being aware of these factors, you may decide that parental anxiety is playing such a large role in a child’s pain experience that it needs to be addressed in order for the child to get better functional outcomes.  This is a delicate situation and how you address it as a clinician is probably best navigated according to the specifics of the circumstances.   A referral to a psychologist might ultimately be needed, however you may be able to address some of the issues with the parents using an educational approach.