In the second of two blog posts inspired by the Paincloud convention, I am going to attempt to describe some of the research produced by Dr Tory Madden, who finished her PhD with the BIM group in Adelaide, Australia.

Tory hails from Cape Town in South Africa, studied physiotherapy and worked as a physiotherapist for five years, including time in a rural South African region.  She decided to do a PhD and in creating a list of potential supervisors, she aimed high and placed Professor Lorimer Moseley at the top of the list.  Her strategy paid off and when she began negotiations to begin her PhD, she had to start with one small but important bit of research  – where on earth was Adelaide?  Her move to Australia was not a completely easy or smooth process as these round the globe transitions can sometimes be (I can attest to that!) and it was confounded by the fact that she had started dating a rather delightful fellow named Matthew just 6 weeks prior to the move!  To her mother’s delight, Tory was able to smash out her PhD in 3 years and return home to her man, who subsequently became her husband.  Back in South Africa she now works as a post doctoral research fellow at the University of Cape Town.

Tory’s research was on classical conditioning and was designed to test the idea that many clinicians hold to be true – that not only can pain occur in the absence of nociception, but it can be brought on by non noxious stimuli such as tactile stimulation or movement. The theory might be that these non noxious cues may have been frequently occurring at the same time as the nociceptive event in its initial phases.  When the initial event resolves and the tissue heals, but the pain has hung around despite there no longer being nociceptive input, is it possible that the non-noxious stimuli that were associated with the initial injury are triggering the pain? This pairing of non noxious and noxious stimuli could be seen as an example of classical conditioning.  My laypersons way of describing it would be to say – When “Thing 1”, which is non nociceptive, occurs at the same time as “Thing 2”, which is nociceptive and results in pain, “Thing 1” and “Thing 2” might be described as being paired together.  So if we remove “Thing 2” and just expose the person to “Thing 1” (which shouldn’t normally cause pain), we may be able to create a pain response.  The most famous example is commonly known as  ‘Pavlov’s dogs’ experiments.  There has been a fair amount of research into classical conditioning in relation to fear and this research has provided some effective evidence based ways for psychologists to help a person reduce fear and anxiety.  Additionally,  classical conditioning has been demonstrated to be involved in the maintenance of fear of pain (1).

In order to better understand what clinicians thought about this scenario, she started with a survey to determine just what people thought was going on and how well backed by research they thought this was.  She found that overwhelmingly clinicians did indeed think that pain can be a classically conditioned response to a non-noxious stimulus and that they believed this was backed by evidence (2).  She and the team then undertook a systematic review to establish what the literature said about evoking pain with a non-noxious but associated stimulus (allodynia) and about amplifying pain with an associated stimulus (hyperalgesia).  They found evidence to suggest that classical conditioning could amplify pain but not enough evidence to draw a conclusion about its role in the eliciting of pain (3). 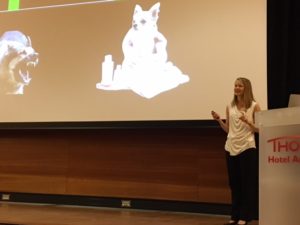 At this point they went back to the drawing board and thought a bit more about the design process and with some tweaking, came up with a model that they thought would better be able to capture the effect of pairing the stimuli to see if they could create a classically conditioned response.  In this second round of testing they paired a vibration stimulus at one location with a painful laser stimulus, and a differently placed vibration stimulus with a non painful laser stimulus.  After the pairing process they used an “at threshold” laser stimulus – which was designed to be right on the border of pain – and they found that when they cued the participant with the vibration location that had been paired with the painful stimulus, the participant was more likely to report the laser to be painful, than when they cued them with the other vibration location.  Thus demonstrating that pain thresholds can be influenced by non-nociceptive sensory stimuli, via a classical conditioning effect (5). This is not quite the same thing as pain being elicited solely by a non-painful stimulus, because the participants still received an at-threshold test stimulus – but it’s a step in the right direction.

Phew…. tricky stuff isn’t it? So what does it mean?  Well, probably that the clinicians who answered her survey were onto something, despite there being a lack of evidence for their assertions.  Perhaps  associative learning in subacute pain can play a role in the transition to chronic pain in the absence of tissue damage? Understanding this better can help us to direct treatment of both early pain states and chronic pain.  This research also provides a foundation for future studies to look at patients with existing pain states, as it provides information about how a healthy nervous system behaves.

As well as her published academic papers, Tory has written some cracking blog posts on the BiM website – you should check them out.

Tory and I getting our selfie on at the Paincloudconvention 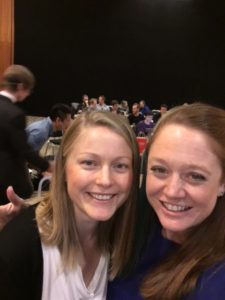 2. Madden VJ, Moseley GL. Do clinicians think that pain can be a classically conditioned response to a non-noxious stimulus? Man Ther 2016, Apr;22:165-73.